Much to my chagrin, it wasn’t going to be something I could ride around in and drink delicious Crux brews. My disappointment quickly turned to joy when that first grisette (a wonderfully crisp, light and underappreciated beer style) hit my lips. What the project actually turned out to be is a very “Crux” version of a traditional brewing style that has been modernized and is still being used by a handful of more enthusiastic brewers. 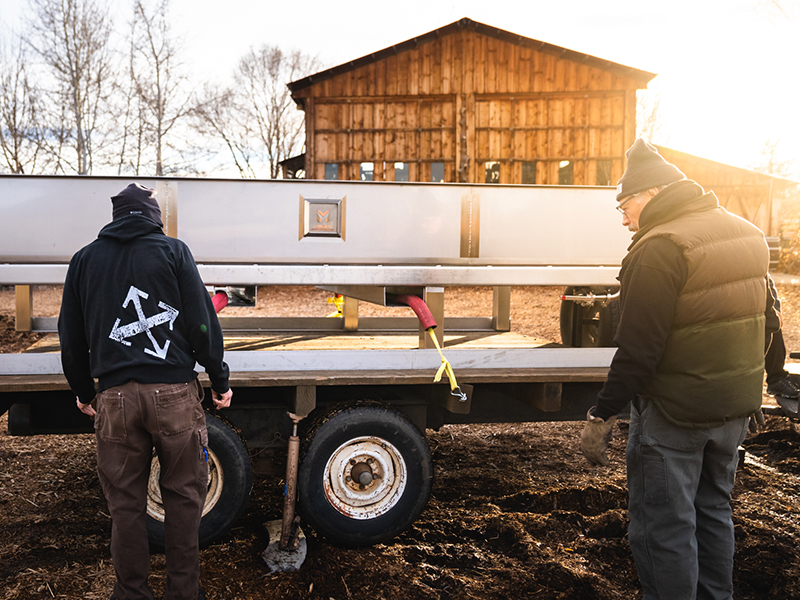 So what is a coolship? The VERY simple version is that it’s an open fermentation vessel where natural yeast and bacteria help create spontaneous fermentation. It’s basically the exact same process as all the other beers we drink but it introduces unique flavors and challenges. It didn’t start out as a fun experimental project though, it was used out of necessity. Our current brewing process and equipment allows brewers to cool brews down in a controlled environment thanks to modern refrigeration. When beer was first being brewed there was no such thing as refrigeration. The solution was to cool beer outside in an open tank that was very wide and shallow, creating more surface space and allowing it to cool down faster. This was the purpose of the original coolship (back then it was a koelschip).

The current coolship process is generally done indoors, in a more controlled environment, to make beers replicable. As you can imagine, there are a significant number of variables that come into play when leaving a beer outside overnight. So when Larry (owner, master brewer, and fermentation aficionado) decided he wanted to try his hand at a coolship he figured they should really lean into the “project” part of the name Crux Fermentation Project. When I asked Larry why he put his first coolship on wheels and decided to make beer outside, the answer was simple. He wanted to harvest natural flavors and use those to allow the beer to change. Their goal is to dial in a recipe and get to the point where the main variable is Mother Nature.

With that in mind, Larry and his team set off creating their first Gypsy Coolship brew. Number one was that wonderful grisette I mentioned earlier. They kept this one close to home and left the ship on the lawn right outside the pub, choosing to keep it close just in case they ran into any issues. Fortunately for our taste buds, nothing went wrong and the beer came out beautiful! Round two got the ship out on the road for the first time, finally earning the gypsy moniker. Teaming up with the Deschutes Land Trust allowed this experiment to take place in the Metolius Preserve. Spending an entire night out under the trees really had an effect on the flavor profile of the brew. It didn’t take much asking to find out that Larry has a hard time not adding a little extra nature… This one features a “dry hop” process consisting of fir tips, flowers and other forest flavors.

Number three got the team out of the forest and onto a farm, this time partnering with the folks at DD Ranch in Terrebonne. With Smith Rock watching over it, this brew also spent a full night out in the fields. Oh but they weren’t done there! After its one night out this beer took a 12 month nap in oak barrels. The final product gave us citrus, pear and just enough funk to make you think about the brewing process. The fourth, and current, in the coolship line was again brewed in partnership with the Deschutes Land Trust. This time the crew ended up at Camp Polk Meadow Preserve just outside of Sisters. It was just recently brewed and put into barrels so we should see it come available in a little under a year.

I know you’re ready to run out and find one of these beers, but wait! Once you do have one of these bottles in your hand you’ll need to pay close attention to the fascinating and very impressive artwork. Each of these releases has a unique story and they are all told through the work of local artist Sweet Pea Cole. A graphic and creative artist, Sweet Pea has been in the Northwest since the mid 90’s and is very familiar with our unique culture and lifestyle. She had been working on an idea involving a “landlocked sailor” before the crew at Crux even started the Gypsy Coolship project. Once Sweet Pea heard about it she felt the sailor was the perfect representation of the Gypsy Coolship and Crux agreed.

Sweet Pea has now designed all the label art for the project. When you look at the artwork you’ll see some constants no matter which release you have. The main part is the coolship itself with the captain (Larry) manning the helm. His muck boots and waders are a subtle nod to being both brewer and captain. Of course every bottle can’t be the same! Each one offers a unique perspective on the location of the brew. While enjoying a glass see if you can find all the specific characters and distinctions that made that beer so special. The stories behind each character are targeted to the location where the coolship was for the brew, see if you can make the connections! To close, I want to leave you with some inspiration directly from the man, the captain of the ship, Larry. I asked him: “If you could tell people one thing about the Gyspsy Coolship, what would it be?” His response says it all:

“Open your mind to what Mother Nature can brew.”